Yesterday morning, a fit of coughing drove me out of bed at a quarter to six.

It’s amazing what you can get done when the kids are still asleep, and when you’re driven by otherwise-boredom.

I’ve started slotting this into a bilingual document, in line with the previous years:

I’ll not reproduce it all here. Instead I’m going to start unpacking some things that I’ve found interesting.

Starting with where the Banquets took place.

1836 is the last year to meet at the ‘Great restaurant in the Place du Châtelet’ named as ‘le Veau qui Tette’ [The suckling calf] – from 1837, they moved on to Ladmiral’s in the Rue Sainte Marguerite, in Saint German.

Let’s see where the Veau qui Tette is in Paris, and what it looks like now.

A bit of historical detective work.

I think I can – and here are a few clues.

OK, the building appears to bear no resemblance to the image above… and there are two other present-day buildings on the square that match nearly exactly to the lower floors of the architecture of the image above.

But take a look at the other pictures of it at the Paris Pittoresque site (where I got these) and you’ll see a variety of images from different dates. You’ll also find – if you can pick through a translation (or read the French) that the restaurant evolved from a butchers, to a ‘taverne’, and moved a number of times over its history, to end up butted up against the Châtelet prison, where its roof served as a jumping point for escaping inmates.

So, it’s not really entirely certain yet where the 1834,5 or 6 banquets were actually held. But if I had to commit, I’d say the restaurant sat in a much more built up (at the time) site where the ‘Centre des Notaires’ now sits, on the Avenue Victoria, on the North side of the square.

I find it fascinating to be able to look at the actual site where the early banquet events took place and to imagine the November arrival of dozens of Deaf men.

Did they mill about in the square before and watch boys playing boats on the fountain (see the image above close up)… Did they huddle in quickly to escape from the icy Seine blast?

I only wish I’d visited it when I was in Paris myself.

And – in case you’re interested – here’s a much more modern picture of the restaurant when it was still, Le Veau qui Tette 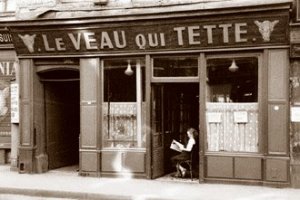